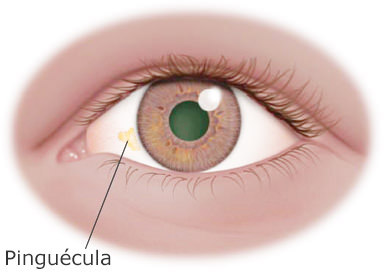 Is a yellowish, slightly raised thickening of the conjunctiva on the white part of the eye, close to the edge of the cornea. Pingueculae typically occur on the part of the sclera that is between your eyelids and therefore exposed to the sun.

While pingueculae are more common in middle-aged or older people who spend a lot of time in the sun, they can also be found in younger people and even children — especially those who are often outdoors without protection such as sunglasses or hats.

In most people, pingueculae cause few symptoms. But a pinguecula that is irritated might create a feeling that something is in the eye like a foreign body sensation.

In some cases, pingueculae become swollen and inflamed, a condition called pingueculitis. Irritation and eye redness from pingueculitis usually result from exposure to sun, wind, dust or extremely dry conditions.